Drummer – Jeff is an independent artist that has played in musicals, videos, clinics, countless studio sessions, rock festivals, national and international tours with many artists of diverse genres. He is experienced in playing to a click track in both the recording studio and live setting. Jeff is easy to get along with, open minded and a team player as well as being able to adapt his look and playing style to many diverse situations.

Drum Instructor – He has many years of experience teaching an eclectic portfolio of students ranging from 5 years of age to 65.

Producer/Engineer– Jeff's experience in a recording studio ranges from Country Music to Blues to Rock and Metal, recording all instruments, mixing and producing from start to finish.

Actor – Jeffrey Moscone has been the featured artist/actor in music videos as well as writing, directing and acting in a short film.

o     Artist, Keith Pittel (Pop) – Drums and Master for the single “Tell Me A Story” 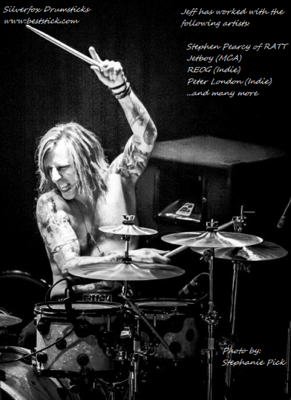